Cromaris is one of the world’s leading producers of Mediterranean white fish in the world focused on top quality and freshness of its products. Professional staff, innovation, sustainable and responsible production and care for the environment are embedded into core company values and business practices. 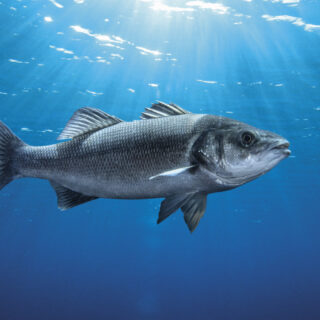 European Sea bass (Dicentrarchus labrax), belongs to a family Moronidae. Sea Bass is a predator and his predatory nature is evident in etymology of its Croatian name ‘lubin’, which comes from the Latin word for wolf ‘lupus‘. He swims very well and is known as an extremely intelligent fish. His body solid build, robust, but at the same time elongated and elegant body lines. His head is of medium size with a disproportionately large mouth on which the lower lip is slightly protruding. Sea Bass doesn’t have large teeth, but they are numerous and very sharp. There are several strong spines on the gill cover. The body of the Sea Bass is covered with small scales. It is a light lead-gray color which turns sideways into gray-silvery, and down into silvery-white. It has a blackish spot on the body above the gill cover. The predecessor of Cromaris, the Zadar company Cenmar, was a pioneer of mariculture in the Mediterranean Sea and introduced the first cage for sea bass in 1979. With inherited expertise and 40 years of experience, Cromaris farms its Sea Bass in beautiful locations in the central Adriatic.

Gilthead Seabream belongs to the Sparidae family. Seabream is one of the highly praised Adriatic whitefish. It was extoled even in the ancient Greece because of the magnificent motions. Its attractive appearance earned it a nickname “Queen of the Sea”, given after its characteristic golden spot. Seabream stands out with a large and robust head with developed jaws and large lips. The upper jaw is slightly protruding above the lower. Her body is solid, oval in shape and compressed laterally. On the upper part of the body it is bluish-greenish-gray and on the sides it is grayish-silver in color, with longitudinal brown or brownish-green stripes. The lower part of the body is silvery white. There is a gold to orange spot on the upper part of the gill opening, and the upper corner of the gill openings is covered with a purple-black spot. Between the eyes is a bright golden bridge. Cromaris sea bream is farmed in Adriatic Sea.

Meagre (Argyrosomus regius) is a native, almost forgotten, first-class white fish, which only a hundred years ago was abundant in the Adriatic Sea. It is a fish of the family Sciaenidae, which lives in the shade, sheltered from view at depths greater than 30 m. Meagre has an elongated body, droplet-shaped, slightly flattened. Mouth is large, with multiple rows of teeth. There are 2-3 rows in the lower jaw and 2 rows in the upper. It is characterized by a silvery gray color with a bronze sheen on the sides. The inside of the mouth is orange-yellowish and the fins are grayish. We launched this first-class white fish on the market in 2011 and we are proud to have returned it into the Adriatic.

Greater Amberjack belongs to Carangidae family. Apart from the Adriatic, Greater Amberjack can be found in many warm seas of the world. Depending on the temperature of the sea, the Greater Amberjack changes the area where lives. It lives in deeper waters in winter and approaches sea surface in late spring. Adults live as singles or in small groups. This fish has an elongated silver body with tiny scales that reflect a beautiful glow resembling to rainbow colors. 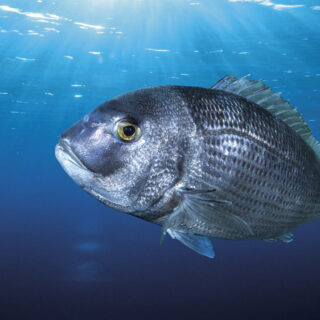 Dentex belongs to Sparidae family. It grows up to 1 meter in length and achieves weight up to 16 kg. In the Adriatic Sea, Dentex can be found on the territory of islands around Šibenik and Zadar, populated habitats are also located near Pula and Rovinj and around the islands of Vis, Lastovo, Mljet and Palagruža. Apart from the Adriatic it is widespread in the whole Mediterranean and Eastern Atlantic. It is solidly build, especially the head with a front part on which strong jaws stand out and very large and sharp fangs after which it got its name. It is oblong, but at the same time quite tall , laterally compressed. It is brownish reddish in color with sparse black spots, while its abdomen turns pinkish silvery white. The tail fin is pink with a black rim. Cromaris started farming Dentex in 2011. and we farmed it in smaller quantities until 2016. In 2019, we resumed production of this extremely farming demanding species.